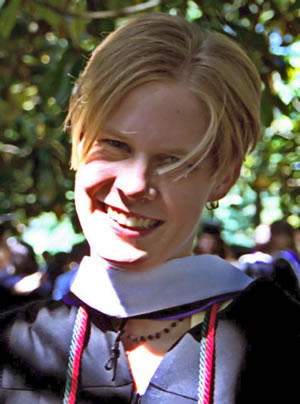 Beth Griffin was an artistic, intelligent and compassionate young woman who met a tragic and premature death after contracting B virus (Cercopithecine Herpesvirus 1), a disease carried by Macaque monkeys, as a result of a preventable ocular exposure and subsequent delayed diagnosis and treatment.

Beth is survived by her older sister, Kimberly Griffin Hicks, a practicing pediatrician in Knoxville, Tennessee, and by her mother, Caryl Peden Griffin, of Knoxville, Tennessee, a registered nurse who owned a health care consulting business prior to Beth’s death and is now an ordained United Methodist minister. Beth’s father, William C. Griffin, was a practicing dermatologist at the time of her death and is since deceased.

Beth’s charismatic personality brightened the lives of those around her. Her talents and interests ranged from academics with an emphasis in advanced biological as well as psychological studies to dance to volunteer community-building activities. Beth attended public schools in Kingsport, graduating from Dobyns-Bennett High School, class of 1993. While in junior high and high school, Beth distinguished herself as a student, a cheerleader, and a member of both National Championship dance teams as well as high school Show Choir.

After graduation, Beth moved to Atlanta, Georgia to attend the prestigious Agnes Scott College. She completed a double major in biology and psychology, was a member of the Modern Dance Team, and was a paid researcher in the biology department. Beth graduated with honors with a Bachelor of Science degree in May 1997.

While at Agnes Scott College, Beth continued to pursue her varied interests. She was a member of the Studio Dance Theater, Outdoors Club, Circle K International, and volunteered for Habitat for Humanity. Academically, she served as an intern at Zoo Atlanta, a volunteer research assistant at White River National Refuge, a volunteer research assistant at Yerkes Primate Center, and was the National Science Foundation Undergraduate Research Fellow. The Elizabeth R. Griffin Research Internship was established by the ERG Research Foundation as a tribute to the important role Agnes Scott College played in Beth’s life.

Beth’s strong academic background was underscored by her research which is credited through the co-authorship of several scientific publications. These include “Maternal Cradling and Infant Nipple Preference in Rhesus Macaques,” “Sexual Dimorphism in the Terminal Abdominal Ganglion of Schistorcerca Americana,” Nesting and Migrating Patterns of Prothonetary Warbler and Acadian Flycatcher,” “Sex Differences in Infant Rhesus Macaques’ Tantrum Vocalizations: The Relationship to the Pre-Natal Hormone Environment,” and “Effects of Prenatal Testosterone on Later Infant Directed Behavior.”

At the time of her death, Beth was a research assistant at Yerkes Regional Primate Research Center at Emory University in Atlanta, Georgia. At Yerkes, Beth was engaged in behavioral research on hormonal influences in Rhesus macaques, and was in the process of applying to continue her pursuit of graduate studies and research in the field of biological/psychological sciences.

Beth’s unfortunate and needless death not only robbed her family and friends of her vibrant presence, but also, deprived the larger world of medicine of her untold potential in the field of animal research. Beth’s incident and death exposes vulnerable areas in institutional policies and practices which potentially sabotage biosafety, biosecurity, and effective emergency response to biological exposures. As a result, Beth’s family established The Elizabeth R. Griffin Research Foundation, Inc. with the fervent desire that the scientific community and the general public could continue to learn the larger lessons and insights her case can provide from a life that had so much to offer the world.